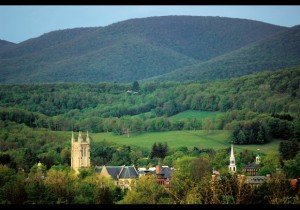 Williams College Williamstown MA is the best in the nation again 2011.

Forbes Magazine recently announced that Williams College in Williamstown MA is rated #1 in the nation.  See the article below courtesy of  ABC online news.

"For the second year in a row, Williams College, a small, western-Massachusetts liberal arts school, has been named as the best undergraduate institution in America. With total annual costs adding up to nearly $55,000, a Williams education is certainly not cheap, but the 2,000 undergraduates here have among the highest four-year graduation rates in the country, win loads of prestigious national awards like Rhodes and Marshall Scholarships, and are often rewarded with high-paying careers.

In second place? Princeton University, which boasts nearly nonexistent student debt rates due to one of the most generous financial aid programs in the nation. Outside of Princeton and Harvard (#6), Ivy League schools fare relatively poorly, suggesting that their reputations might be a bit overblown. Yale (#14), Brown (#21) and Dartmouth (#30) crack the top 5%, but the other Ivies - Columbia (#42), Cornell (#51) University of Pennsylvania (#52) -- do not.

Because of our emphasis on financial prudence, the zero-cost military service academies rank highly. West Point, which topped the list two years ago, ranks third this time, thanks to outstanding teaching (#3) and high alumni salaries (#8), while the Air Force Academy (#10) and the Naval Academy (#17) glide easily into the top 20. Even the less prestigious academies - the Coast Guard (#97) and the Merchant Marine (#158) -- score well.

Outside of the academies, the highest ranked public school is the University of Virginia (#46) followed closely by the College of William and Mary (#49) and UCLA (#55). "