Truth or Consquences in Real Estate

Begun in the 1950's, the popular radio then TV show "Truth or Consequences" ran through the late 1980s. The show 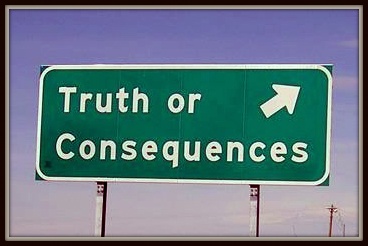 Mr. Fox is referring in large measure to what we know as The Golden Rule. Sadly much of what takes place today in the world of business, whether on Wall Street or politically or even the field of real estate ignores this golden principle in favor of a selfish one, the rule that says "he who dies with the most gold wins."  What a sad, cynical, and hopeless rule that is.

Sure, the accumulation of lots of power, wealth, and things does entertain for a while and feeds the ego of the person doing the accumulating, to a point.  All one has to do however is to examine the lives of some of the most famous wealthy individuals and one notes an important theme.  Sooner or later they devoted themselves to giving it away but too often towards the end of their lives.  So one has to ask the obvious question, was all that striving to accumulate, beat out the other person, worthwhile, did it bring true happiness or lasting value?   We know that they could not take their wealth with them at death and so to what purpose the price they paid.  As someone wise once quipped "there is no luggage rack on a hearse."

In real estate today there are two schools of thought and two basic approaches in serving the prospect/client.  The first and the one that has gained considerable focus and support by many is the school of "winning."  I liken this view to the practice of law because it is based on the premise and definition of "agency."

An agent, so this view holds, owes their undivided loyalty to their client to the exclusion of all other considerations.  If their client happens to be the seller for example, which is the most common relationship for real estate practitioners, then the agent theoretically devotes their entire attention, focus and efforts on behalf of their seller client and ignores or worse, takes advantage wherever possible, of the unrepresented buyer.  In other words, they don't feel compelled in any sense to tell "the truth" and have little concern about the "consequences" to the other party/the buyer.

Please understand that responding truthfully to any questions of fact is required under the state law but responding truthfully to other types of questions is not the concern of the law.  Keep in mind that if the agent knows the facts they must reveal them if asked by the buyer.  If the buyer doesn't ask then no revelation is required.  An agent can make various suggestions or paint an unrealistic pictures in the minds of buyer prospects that are not truthful or accurate and feel in the process they are doing their duty of "agency" to the seller.

Used in the manner the term "salesmanship" is meant as praise for a skillful salesperson.  It is said that they can "sell an refrigerator to an Eskimo" however that same phrase is really doing that client a grave disservice since they do not need one.  This would be an unwanted consequence for a hapless victim of aggressive salesmanship.

Some would correctly conclude based on the most recent real estate bubble and bursting of that bubble, that there was plenty of hot salesmanship going on in the market up to 2006-2007 because lots of buyers at that time threw caution to the wind and were swept up in the "irrational exuberance" of the market assuming that prices would continue to rise indefinitely.  We are now all much wiser as we observe the aftermath and can feel empathy for those who got into the market near the top only to find the later values were well below what they originally paid.

In contrast to the agency relationship is one that has gained more widespread use as an alternative to agency.  This form of service is akin to mediation.  This type of relationship I am speaking of is called transactional brokerage or facilitation.  Just like many who have gained great wealth have turned later in life to philanthropy, I have know quite a few attorneys who have left the practice of advocacy law and become mediators.  Winning, promoting one person over the other and seeking advantage through skillful advocacy, after a while loses its appeal for those with a conscience.

We get down to the nitty gritty of transactional brokerage in the next blog and share why you should consider using this form of representation in your next home sell or home purchase.

Dear Paul, Thank you so much for your help earlier this spring and summer. All is well and we are grateful to have connected with you. I notice that you have reviews from folks with whom you have worked on your website; please feel free to add this testimonial from me and Kim: "We are very grateful to have been able to work with Paul Harsch and Harsch Associates when we purchased a home in Williamstown. Paul is a great [...]