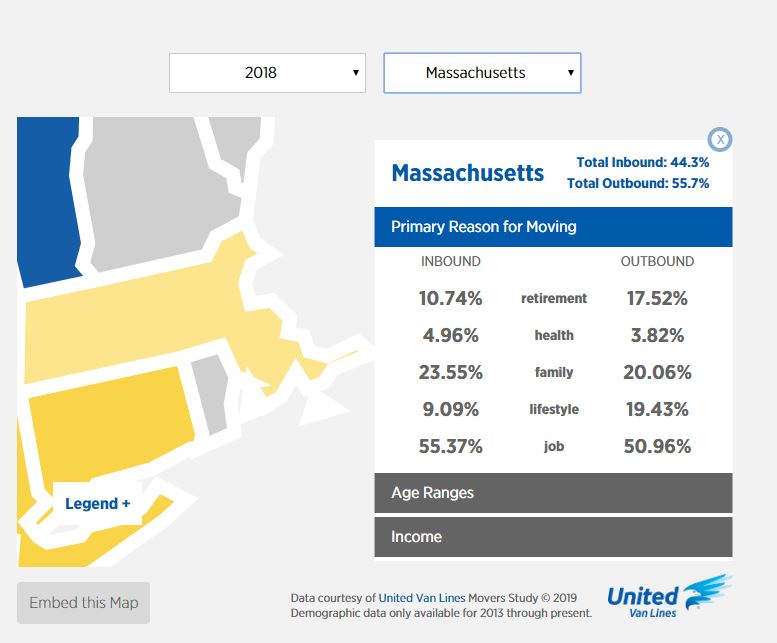 Buying a home in The Berkshires of Massachusetts?  Or selling to  move to warmer climates???  No matter, Harsch is here to help you sell at the best price in the most efficient time to match your needs.  We also help new buyers to get the home they want at the right price that meets your budget.  We have some of the most experienced real estate agents in the industry and in the BERKSHIRES.  Give us a call to begin your next real estate transaction.  We can get the job done- right price, right time and right location.

Read more about data from United Van Lines describing where people are moving to and from by clicking the photo to right.  We provide a small screen shot of 2018 figures for Massachusetts.  Information courtesy of United Van Lines.

ST. LOUIS – Jan. 2, 2019 – Americans are on the move, relocating to western and southern parts of the country. The results of United Van Lines’ 42nd Annual National Movers Study, which tracks customers’ state-to-state migration patterns over the past year, revealed that more residents moved out of New Jersey than any other state in 2018, with 66.8 percent of New Jersey moves being outbound. The study also found that the state with the highest percentage of inbound migration was Vermont (72.6 percent), with 234 total moves. Oregon, which had 3,346 total moves, experienced the second highest percentage nationally, with 63.8 percent inbound moves.

States in the Mountain West and Pacific West regions, including Oregon, Idaho (62.4 percent), Nevada (61.8 percent), Washington (58.8 percent) and South Dakota (57 percent) continue to increase in popularity for inbound moves. In tune with this trend, Arizona (60.2 percent) joined the list of top 10 inbound states in 2018.

“As the nation’s largest household goods mover, our study allows us to identify the most and least popular states for residential relocation throughout the country, year after year,” said Eily Cummings, director of corporate communications at United Van Lines. “These findings accurately reflect not only where Americans are moving to and from, but also the reasons why.”

The National Movers Study reveals the business data of inbound and outbound moves from 2018. In addition to this study, United Van Lines also conducts a survey to find out more about the reasons behind these moves. A leading motivation behind these migration patterns across all regions is a career change, as the survey showed approximately one out of every two people who moved in the past year moved for a new job or company transfer. Other reasons for the high percentage of moves to the Mountain West in 2018 include retirement (28.1 percent), proximity to family (20.8 percent) and lifestyle change (19.4 percent). Compared to all other states, Idaho saw the largest influx of new residents desiring a lifestyle change (25.95 percent), and more people flocked to New Mexico for retirement than any other state (42.74 percent).

“The data collected by United Van Lines aligns with longer-term migration patterns to southern and western states, trends driven by factors like job growth, lower costs of living, state budgetary challenges and more temperate climates,” said Michael Stoll, economist and professor in the Department of Public Policy at the University of California, Los Angeles. “Unlike a few decades ago, retirees are leaving California, instead choosing other states in the Pacific West and Mountain West. We’re also seeing young professionals migrating to vibrant, metropolitan economies, like Washington, D.C. and Seattle.”

The top outbound states for 2018 were:

In several states, the number of residents moving inbound was approximately the same as the number moving outbound. Arkansas and Mississippi are among these “balanced states.”

Since 1977, United Van Lines has annually tracked migration patterns on a state-by-state basis. The 2018 study is based on household moves handled by United within the 48 contiguous states and Washington, D.C. and ranks states based off the inbound and outbound percentages of total moves in each state. United classifies states as “high inbound” if 55 percent or more of the moves are going into a state, “high outbound” if 55 percent or more moves were coming out of a state or “balanced” if the difference between inbound and outbound is negligible.

To view the entire 2018 study, an interactive map and archived press releases from United, visit the United Van Lines website.

Hi Paul After reading that e-mail I feel particularly lucky to have found you. Obviously most Realtors want to make the most money they can on a deal, and your philosophy does not necessarily lead to that outcome.  You are doing the right thing and that is very hard to find these days

Paul, I cannot thank you enough for all you did for us during our visits to North Adams. It was you, above all else, who gave us the confidence to push forward with our home search!